To make the most of any vacation you need to know the best time to go. For travel to the Turks & Caicos Islands, the British Overseas Territory located in the Caribbean; some of the factors that can help you determine the best time for your vacation include the activities happening on the island, the size of crowds and expected weather in the different seasons.

With a population of just over 53,000 people, most of whom live on the island of Providenciales, the tropical archipelago of the Turks and Caicos Islands is made up of 40 cays and islets. Annually, visitors converge on these islands from all parts of the world, but particularly Europe, the United Kingdom, the United States and Canada.

The best months to visit Turks & Caicos are February, March and April, making it the perfect spring break getaway for families with younger kids. May, June and July are also good months to visit the Turks & Caicos Islands for a beach vacation. The busiest month is December, especially during the holidays. Make sure to book in advance when visiting the islands for Christmas! 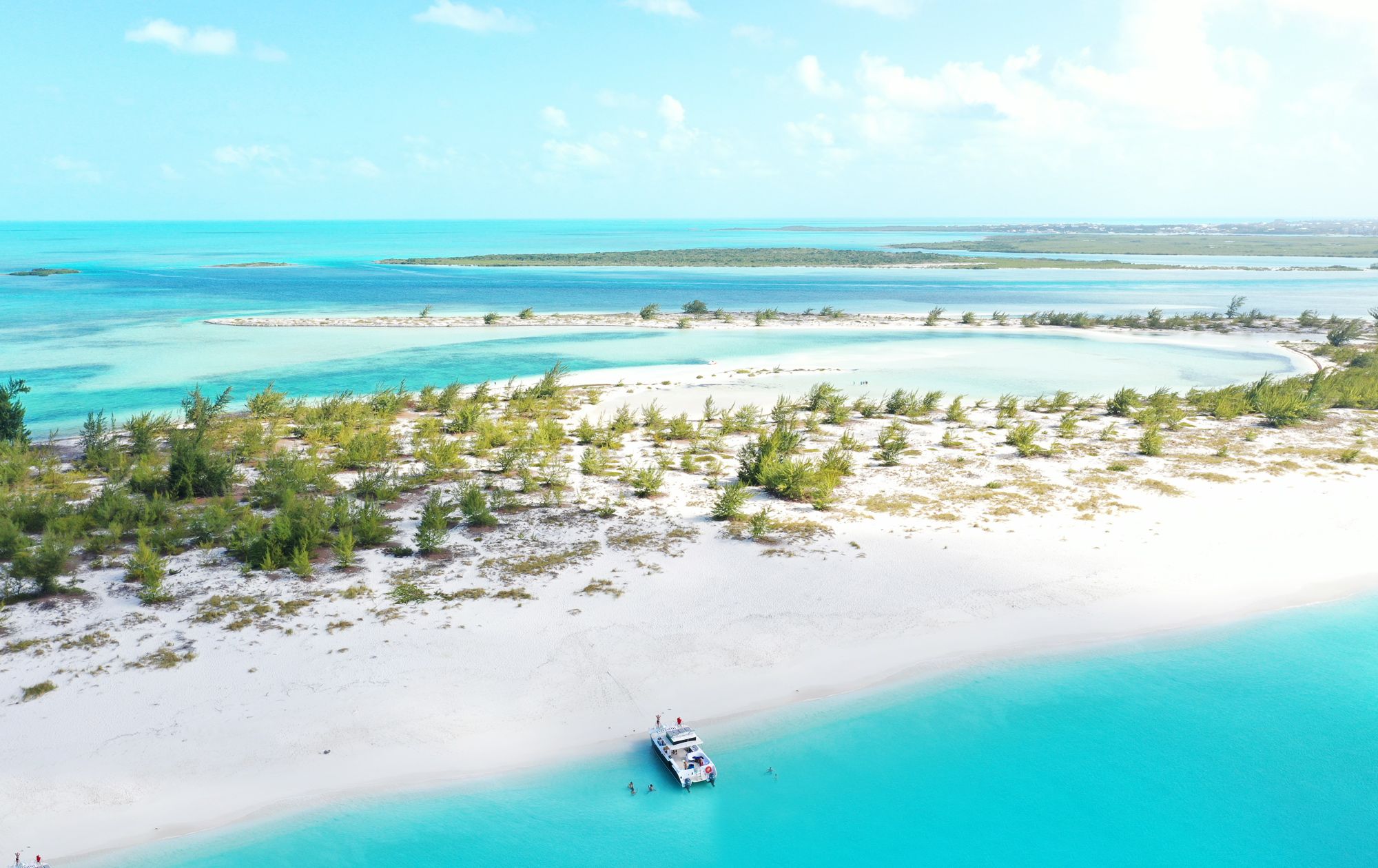 Spring Break parties in Turks & Caicos… not really a thing. Great news for families, not so great news for party seeking types. The Turks & Caicos Islands are not like some of the other Caribbean islands where you’ll have a hard time finding peace of mind at some of the more popular beaches because of spring break. While there is an increase in tourists and beach goers during the high season, you’re unlikely to witness loud music, heavy drinking, and excessive noise at Turks & Caicos’ tranquil beaches.


By the end of this article, you will know just when to go to get exactly the sort of vacation experience you’re looking for.


In this article on the Beaches Blog:

Seasonality on the islands

The Turk & Caicos Islands are an amazing destination year-round. The high season associated with the destination is usually from December to March. These months are also within the Caribbean’s dry season. This means your chances of a sunny summer vacation are sky high. Keeping this in mind, it is important to make your reservations in advance, especially if you plan on travelling for the Christmas holidays, or in time to usher in the New Year on Caribbean shores. The Easter Holidays, around March and April, are also popular for vacations in the Turk & Caicos Islands. If you want to travel during the high season but want to avoid much of the crowd, consider avoiding holidays and school breaks if you can. 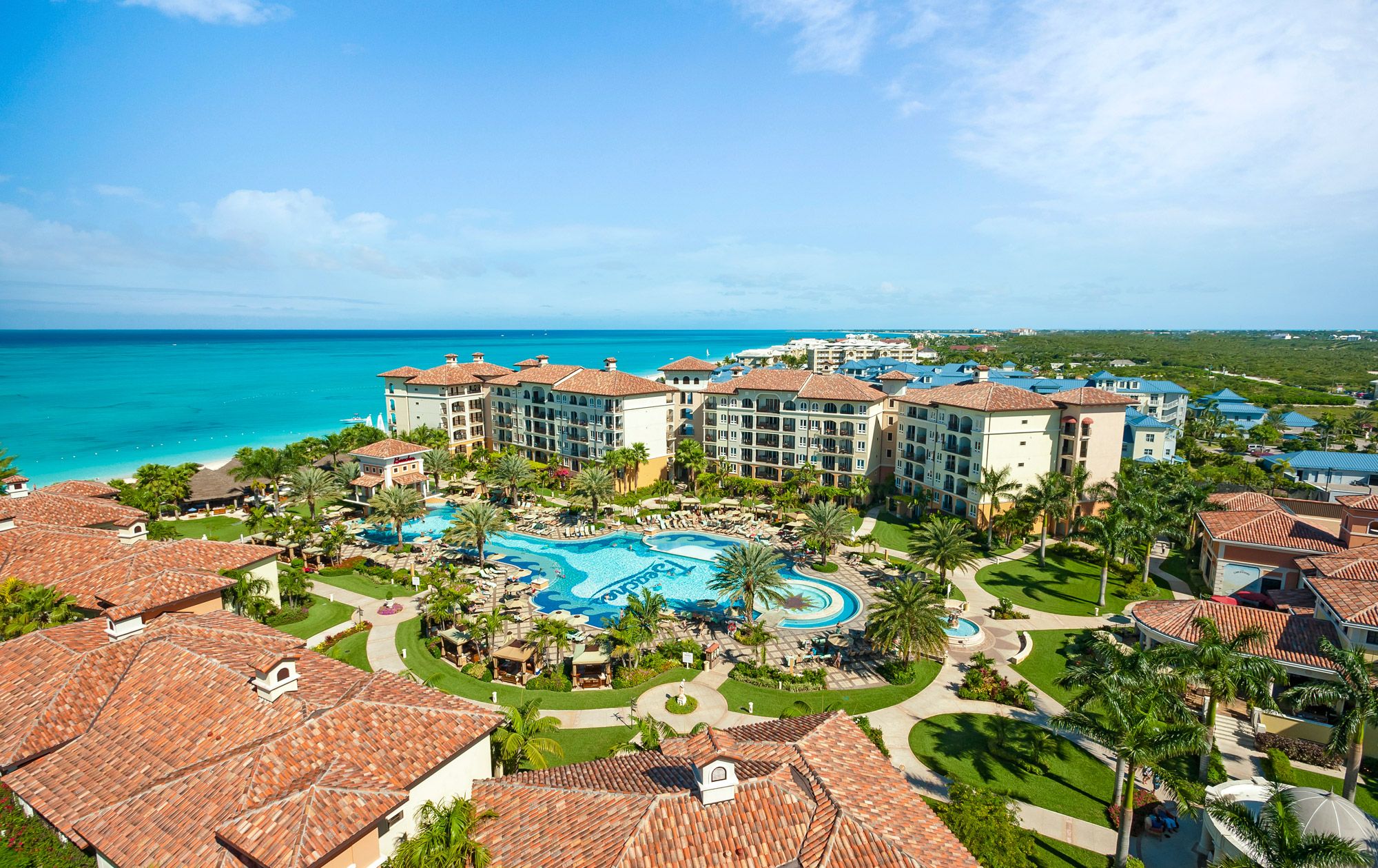 Insider tip: If you’re planning to stay at a family oriented resort, look no further than Beaches all-inclusive resort in Turks & Caicos. This luxurious resort is located on Grace Bay beach, one of the most beautiful beaches in the world. The resort features Pirates Island Waterpark, Caribbean’s only SurfSimulator, 21 high-quality restaurants, food trucks, swim-up bars, all-inclusive water sports, day and night entertainment, professional nanny services, Kids Camp activities for all ages, a night club for teenagers, Sesame Street characters and much much more!

Many people look forward to travelling in the low season because of the associated benefits. Airfare and accommodation rates tend to be more budget-friendly, with some resorts offering great discounts. Low season in the Turk & Caicos Islands officially lasts from June to November, although the number of arrivals often only starts to decrease from August onwards.

Traveling during the off season in Turks & Caicos means you’re likely to find warmer temperatures and some spontaneous showers, which often makes place for sunshine a few moments later. The low season ends in November. 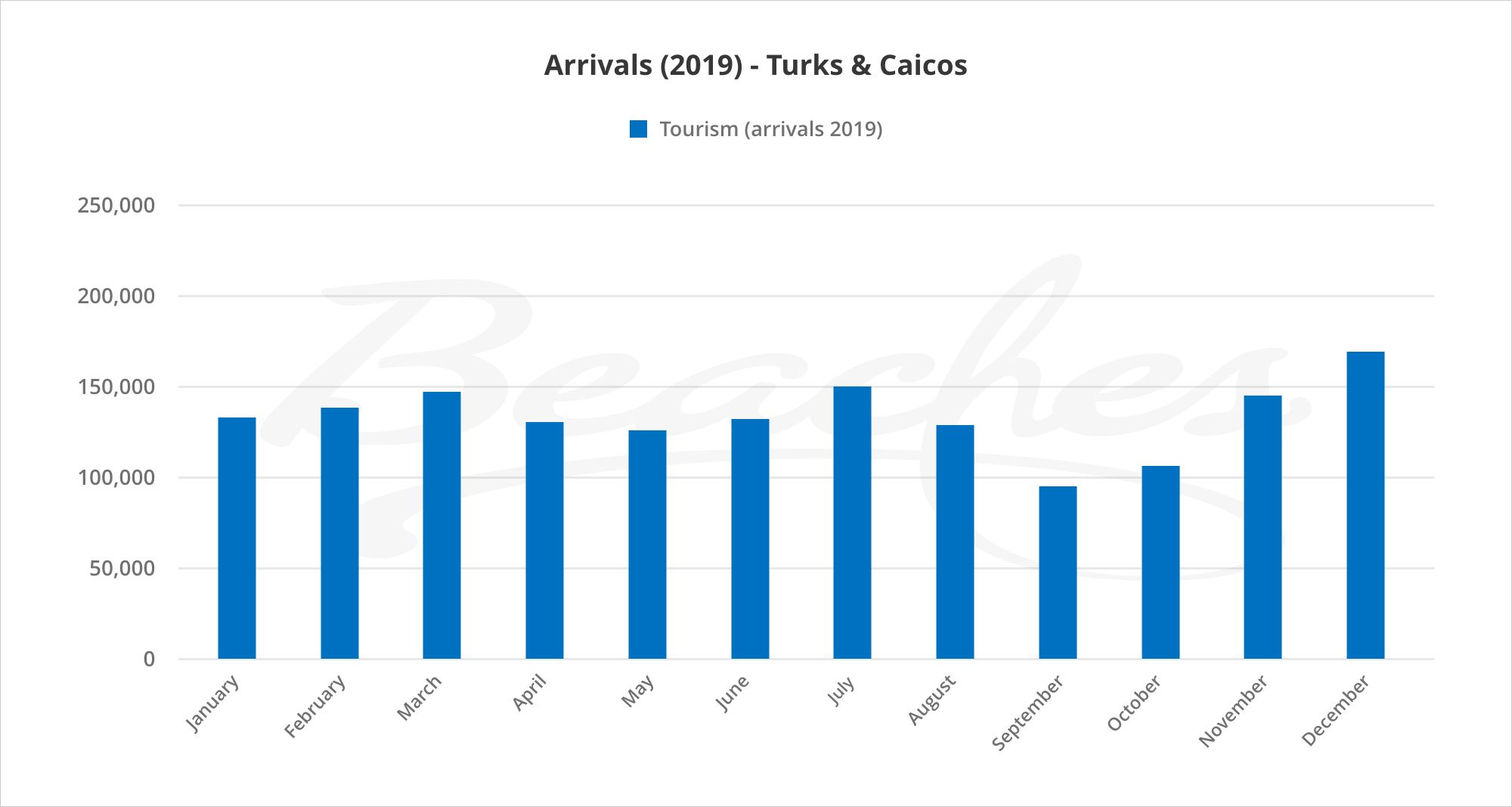 Can’t make the time to travel during the high or low season? Your next best bet is traveling during the shoulder season in April and May, when you’re likely to find prices to be more budget-friendly than in the high season, and fewer crowds. The temperature during these months will be slightly higher than the temperatures during peak season, but overall the shoulder season is probably the best time to get value for money.

What is it like to visit Turks & Caicos each month of the year? 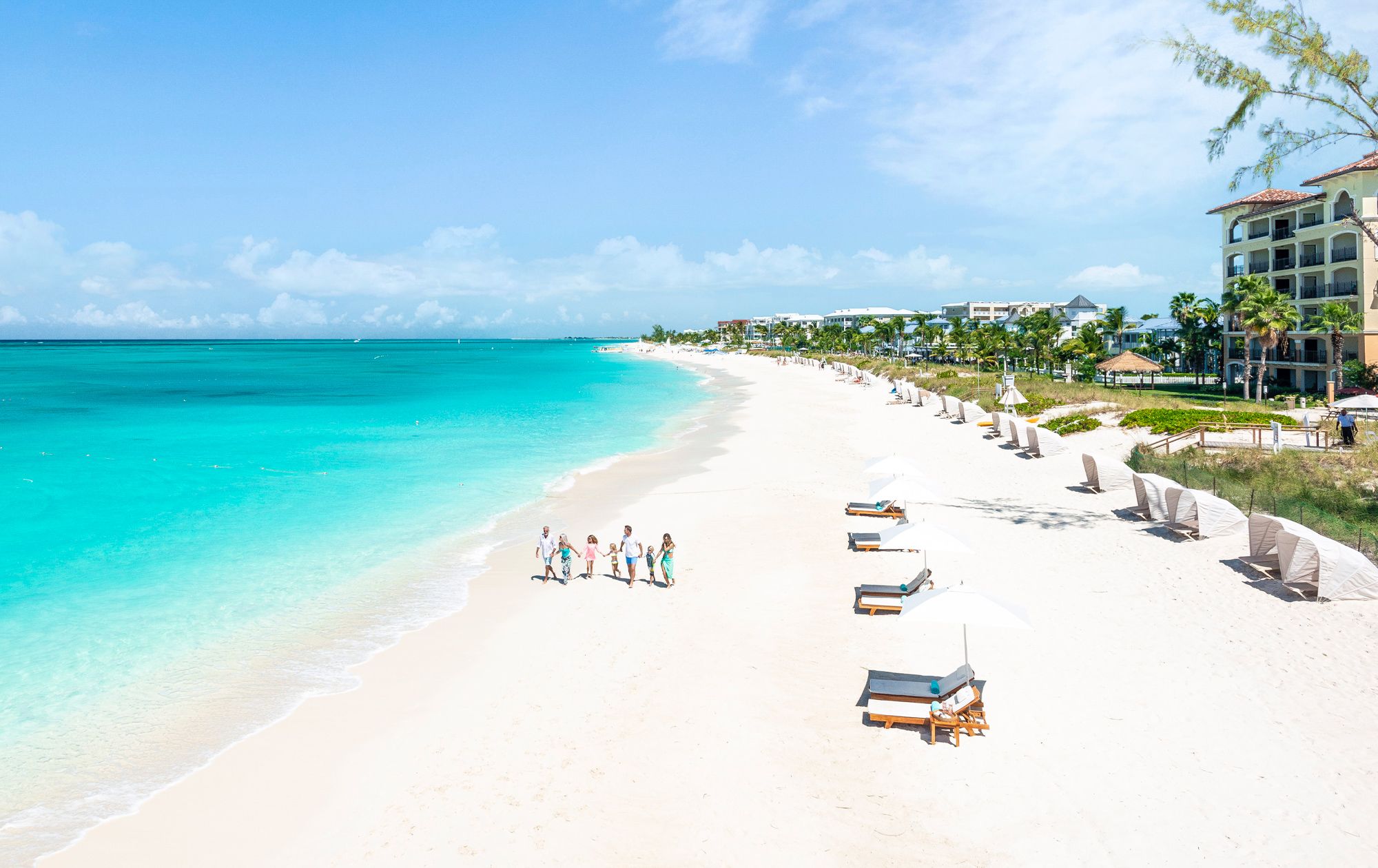 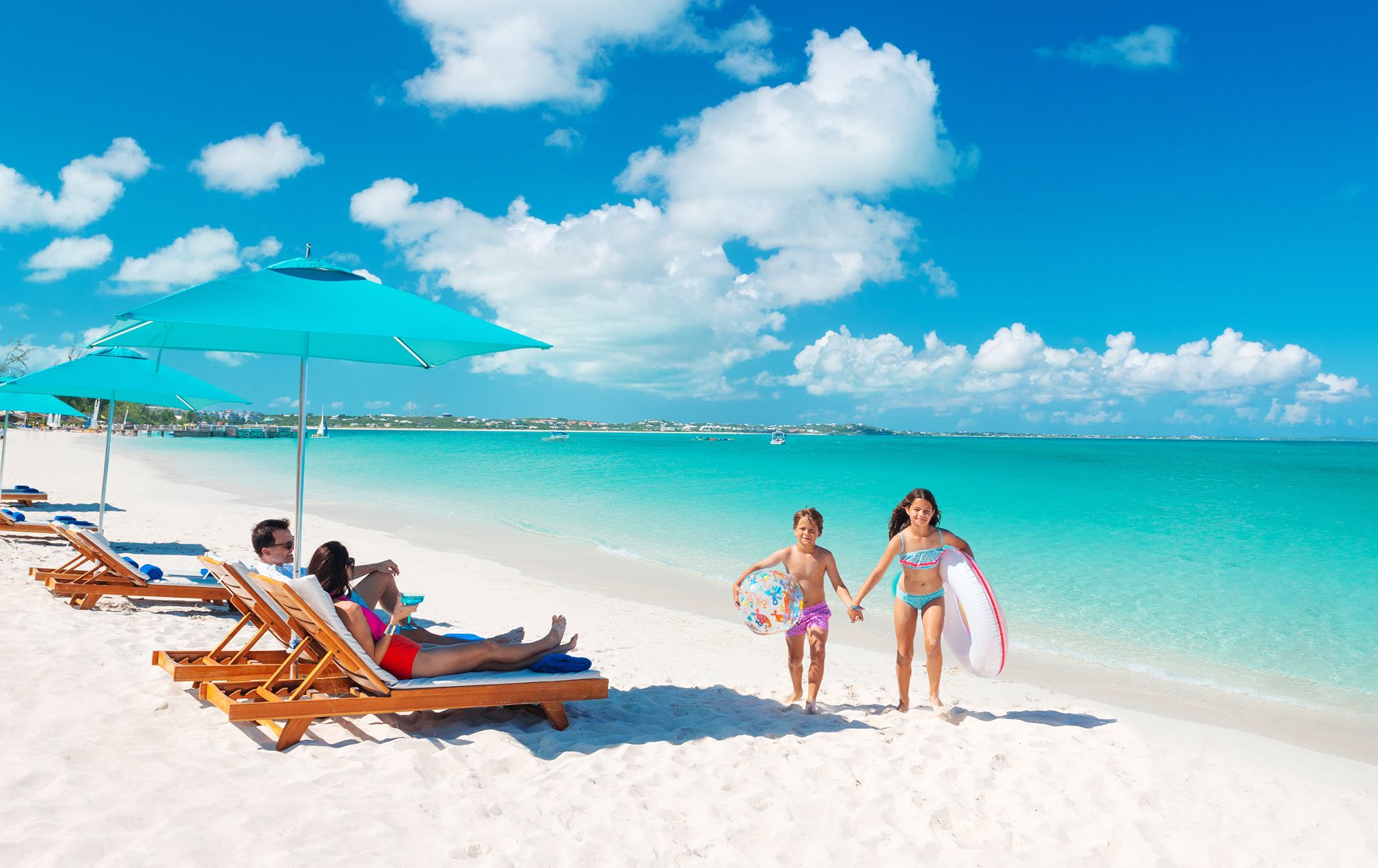 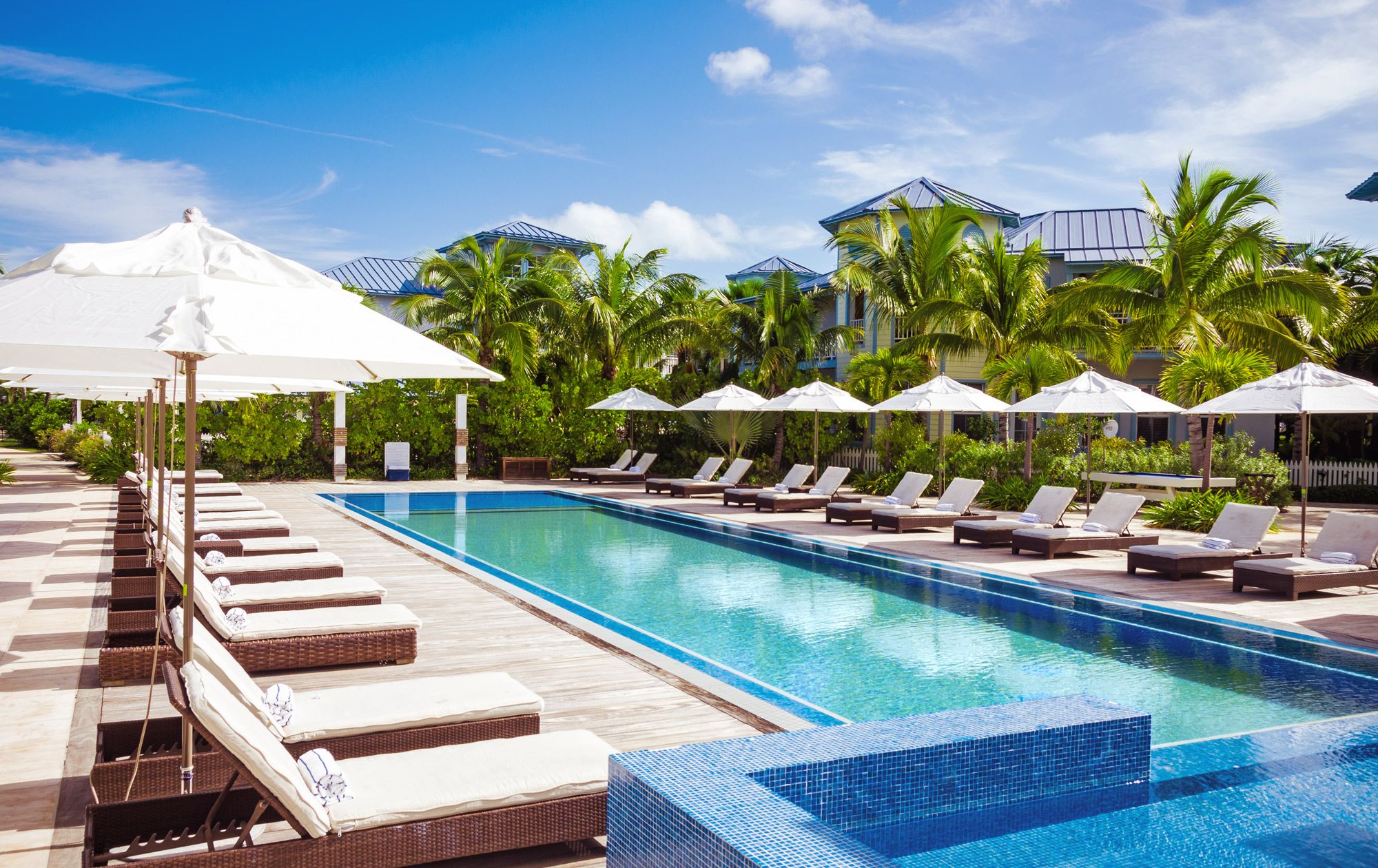 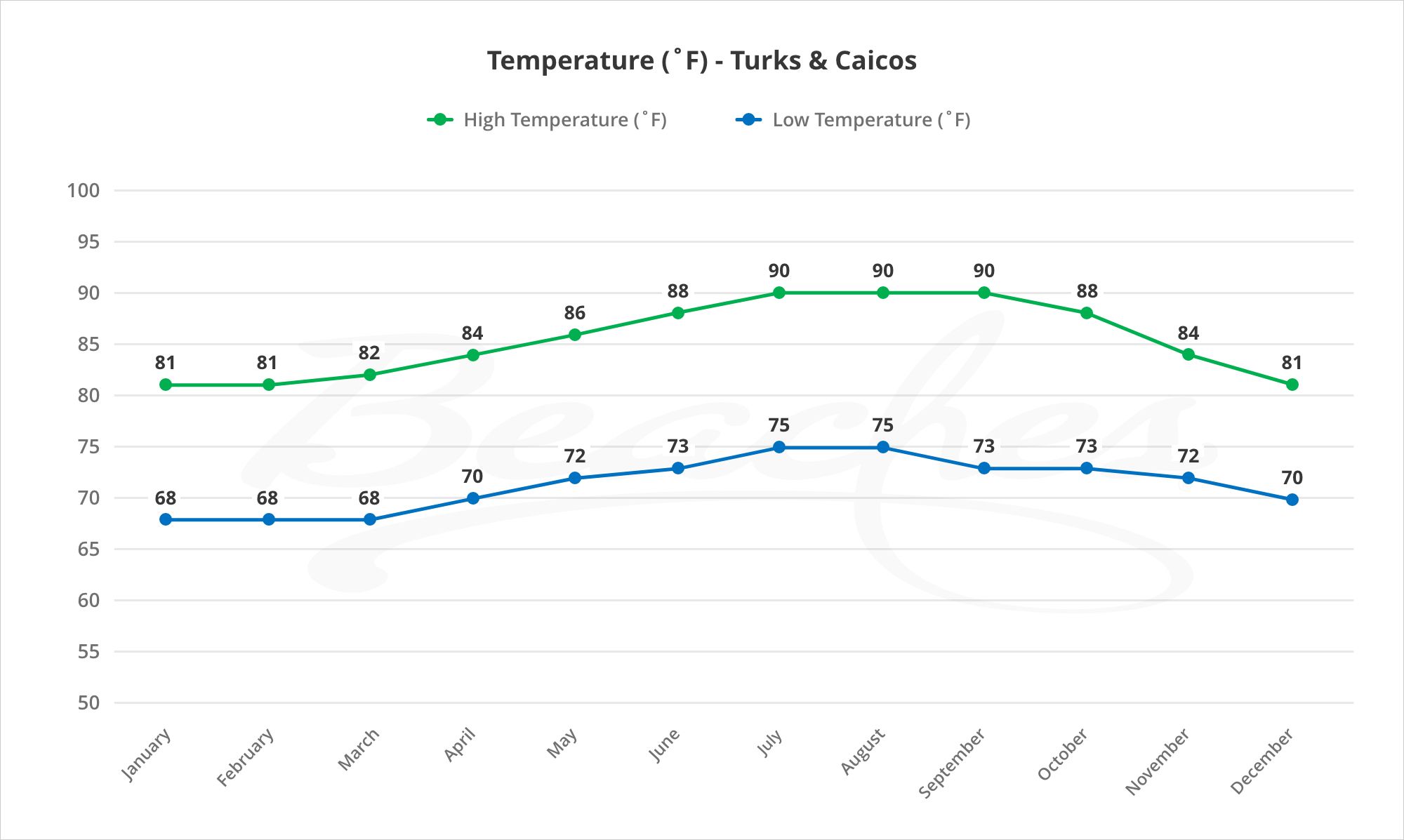 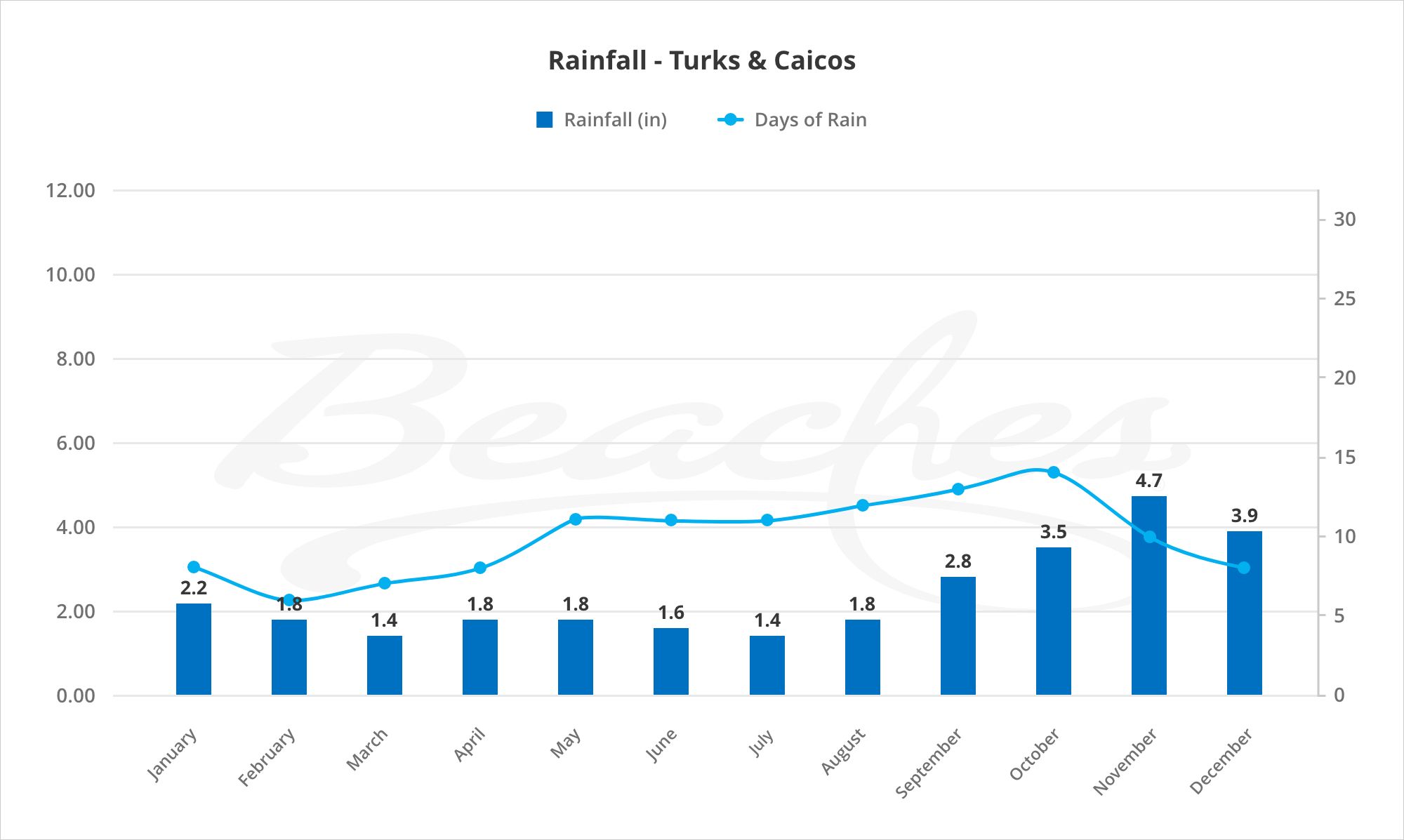 Major events throughout the year

What are the kinds of things you like to get up to while on vacation? Knowing this can help you decide when to visit the Turks & Caicos Islands. There are many festivals, regattas, and other happenings on the islands throughout the year. The best of the best include the following:

This carnival-like celebration that starts in the wee hours of New Year’s Day and includes music, costumed bands, and dancing through the streets.

Boats, food, races and music, the Valentine’s Day Cup has grown significantly from being just something to do for some friends with a handful of boats around Valentine’s Day. It’s now a national event held at Bambarra Beach in Middle Caicos. 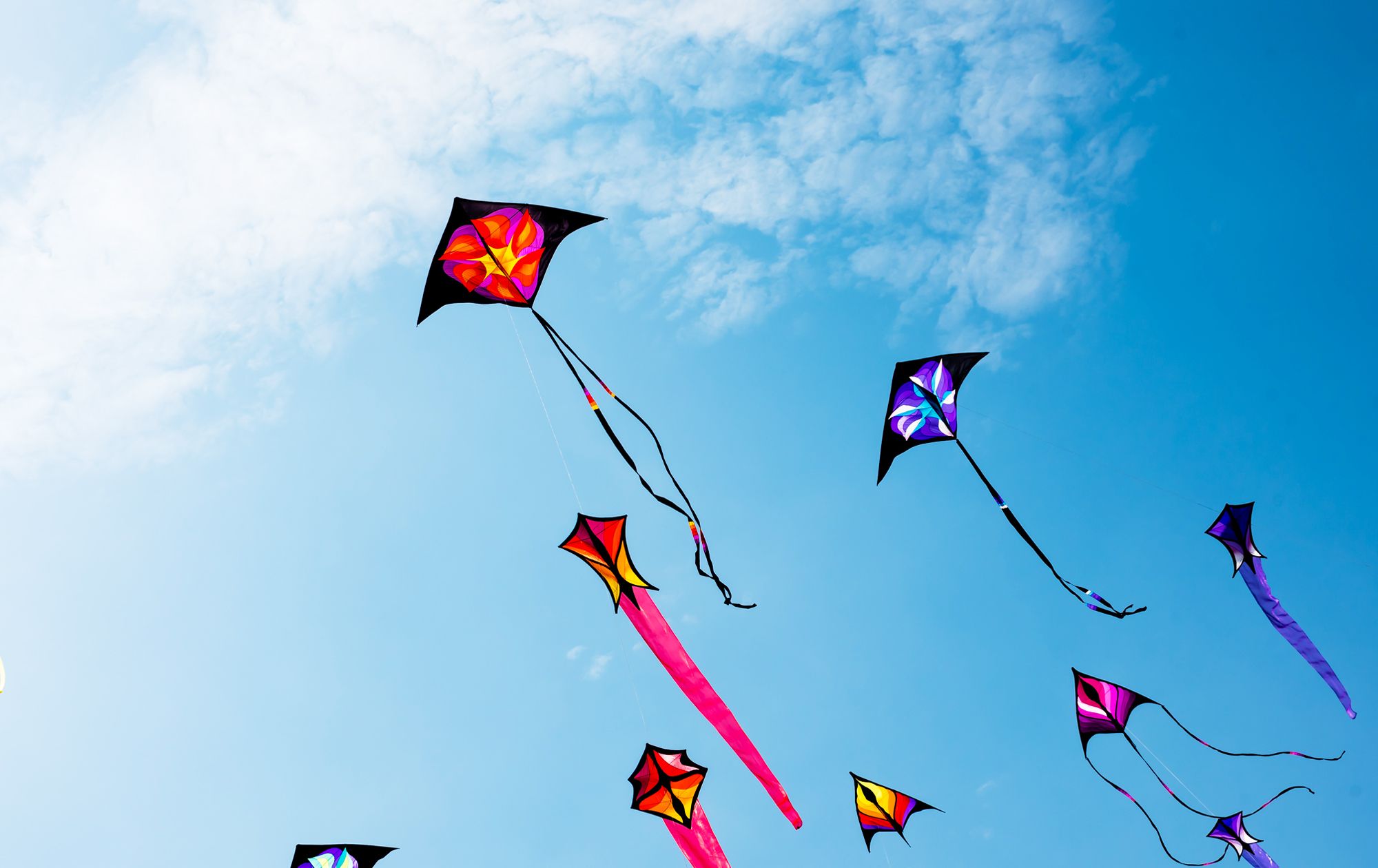 Kite flying is a popular pastime in the Caribbean, in some islands more than others. In the Turks and Caicos Islands this event is amplified in the breezy spring time, as visitors and locals come together in April to show off large, colourful, or otherwise unconventional kites.

Much of Salt Cay’s history has to do with harvesting salt, and this festival held to celebrate this usually happens in late April annually. Located near the island of Grand Turk, Salt Cay has a small population, and this is one of the more exciting events of the year.

There are lots of regattas held in the Caribbean, and the Big South Regatta held on South Caicos is among the most popular. It’s usually held in the last weekend of May.

Lovers of the ocean will find themselves right at home at this regatta, held every year between mid-June and mid-July. Sailing and beach parties are the main highlights.

This 20 year old event is loved by local and international anglers. The tournament, taking place in July, also serves as a qualifier for the IGFA World Billfish Championship. 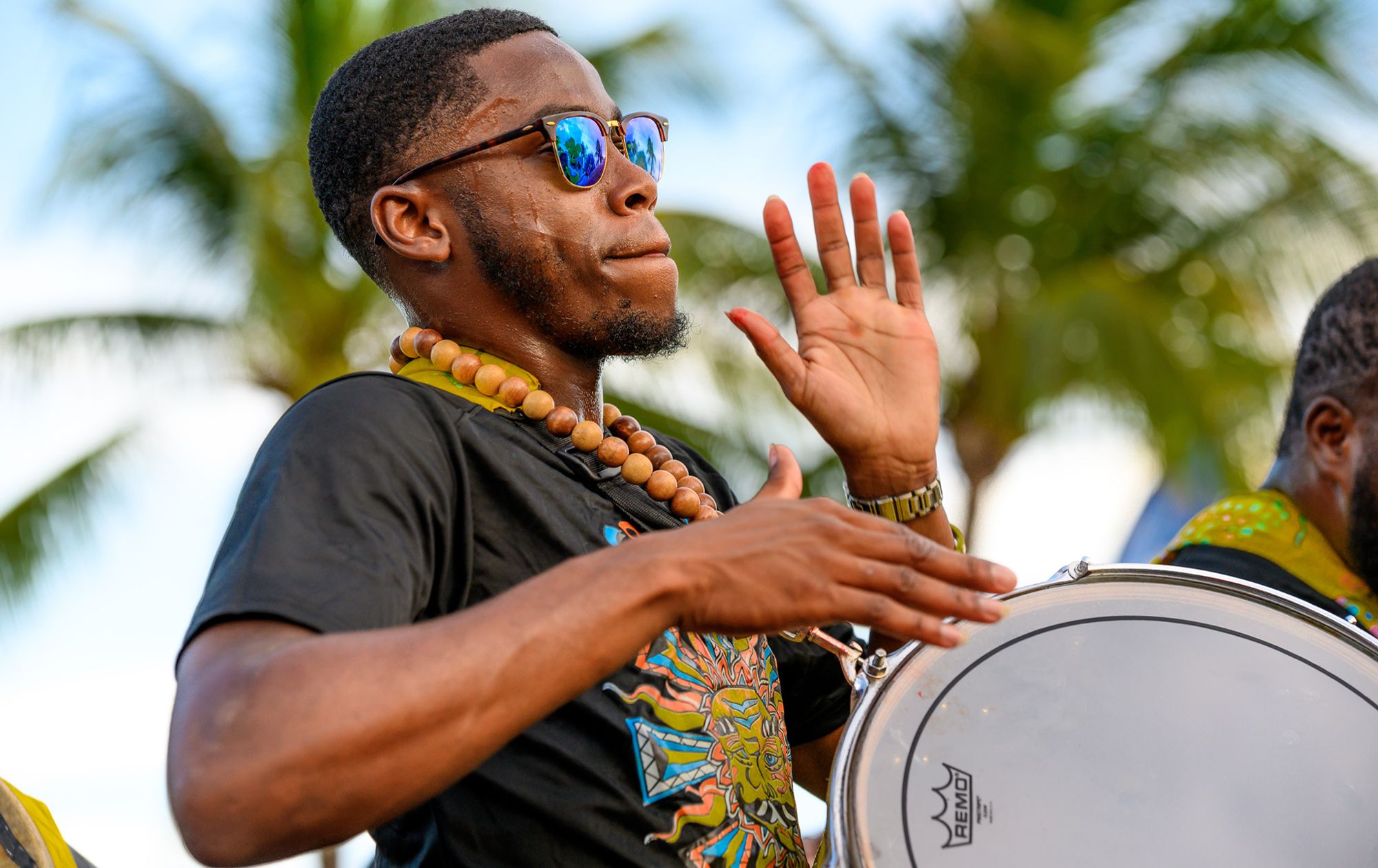 Hosted on the island of Providenciales on the last weekend in November, you can expect conch of all varieties cooked up to perfection, including conch salad, fritters and stew. If you’ve never eaten conch before, this is definitely a good time to experiment.

With an objective of raising awareness of the museum, Museum Day is usually held on the island of Grand Turk every November. The day of fundraising is filled with games, prizes, and lots of food and drinks.

So much to do and experience in Turks & Caicos… 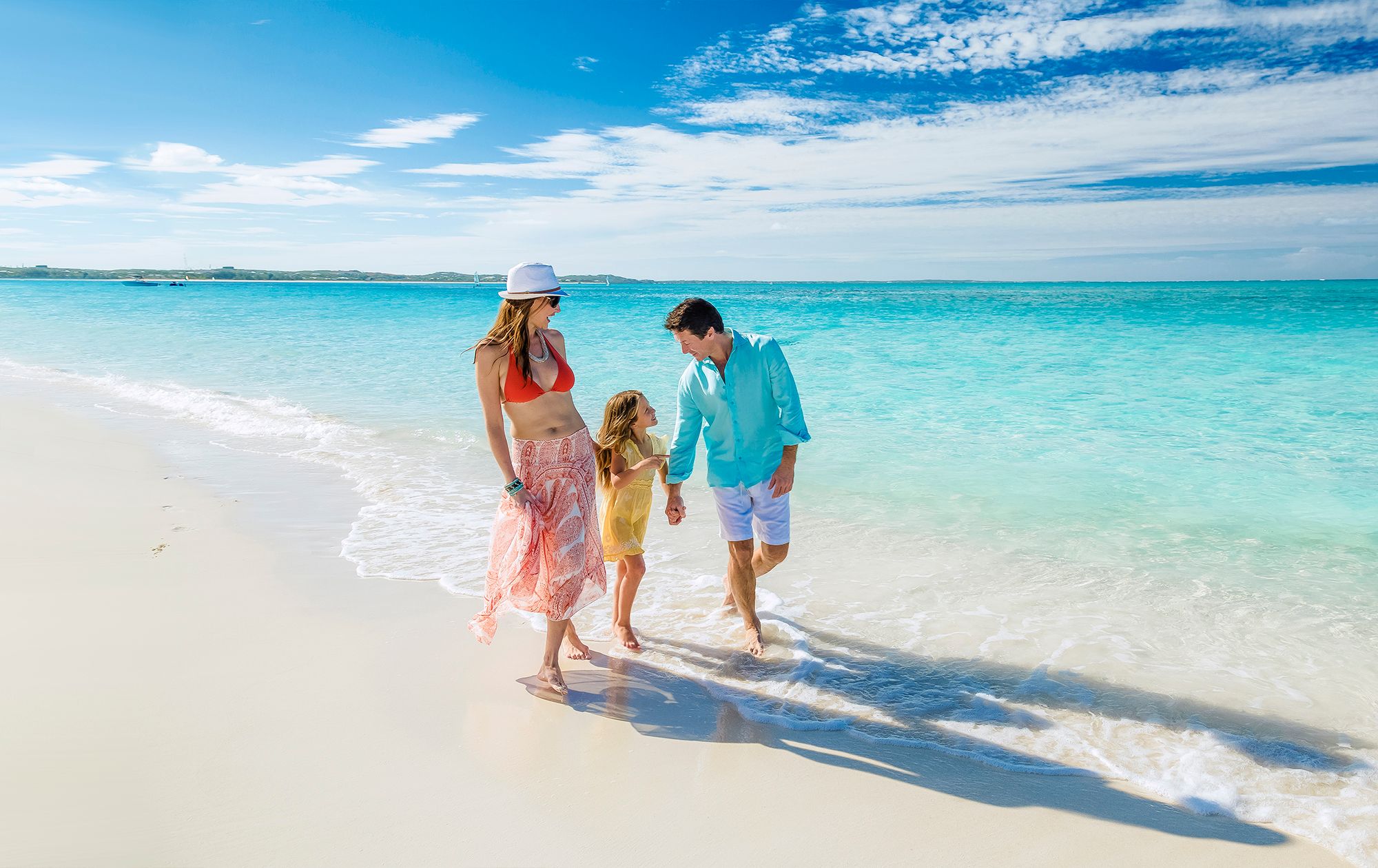 When it comes to a Caribbean vacation, there's no better beach destination than Turks & Caicos. The destination is popular for a reason, and delivers on any expectations you might have of a tropical getaway. Whenever you visit these islands, you’ll be in for a vacation of a lifetime.

Also read: 59 Amazing Things To Do In Turks & Caicos.

Writing for 13-years, Kylie discovered that experiences tell the best stories. As a Caribbean mother who wrote for newspapers, magazines, and blogs, she believes inspiration is even found in our kids!

Writing for 13-years, Kylie discovered that experiences tell the best stories. As a Caribbean mother who wrote for newspapers, magazines, and blogs, she believes inspiration is even found in our kids!