After spending months inside, the demand for travel is rising and a growing phenomenon called “pod” travel is becoming part of our new norm. We sat down with prominent radio show host Mindy Winkler-Jarosinski, and her husband Bob Jarosinski, to see how their trip to Beaches Negril went after traveling with a group of trusted friends (aka their pod) and why they decided that now was the best time to go! 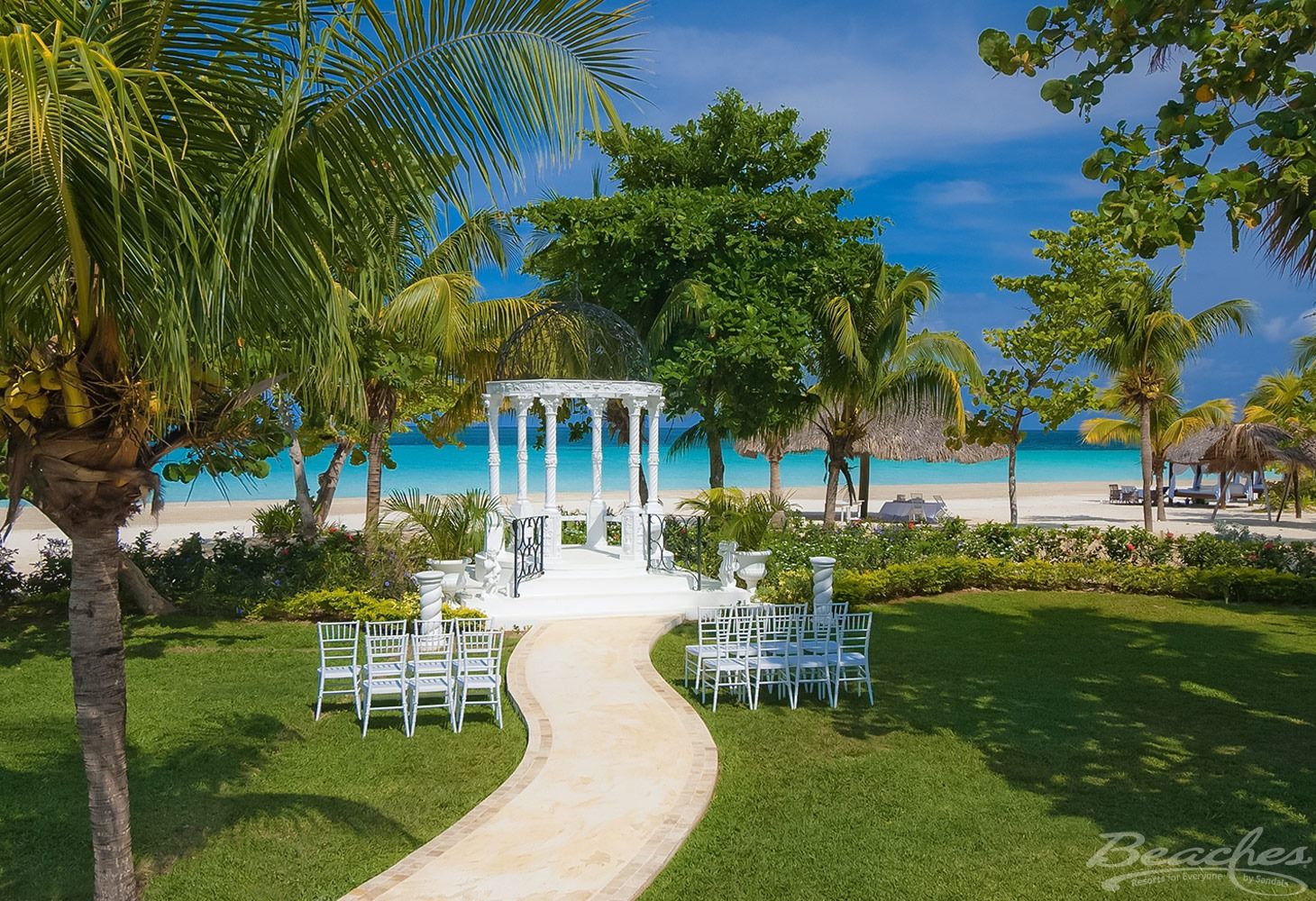 Tie the knot in a beautiful garden gazebo overlooking the Caribbean Sea at Beaches Negril.

In September 2015, Bob and Mindy Jarosinski shared wedding vows in a beautiful ceremony at Beaches Negril. Before leaving Jamaica a few days later, they made one more personal vow: “We’ll be back.” They’d be back to the warm sea, feather-soft sand, care-free mornings and daylong laughter that wound them down to sleep every night in a luxurious suite with a close-up view of the Caribbean’s colorful hues. 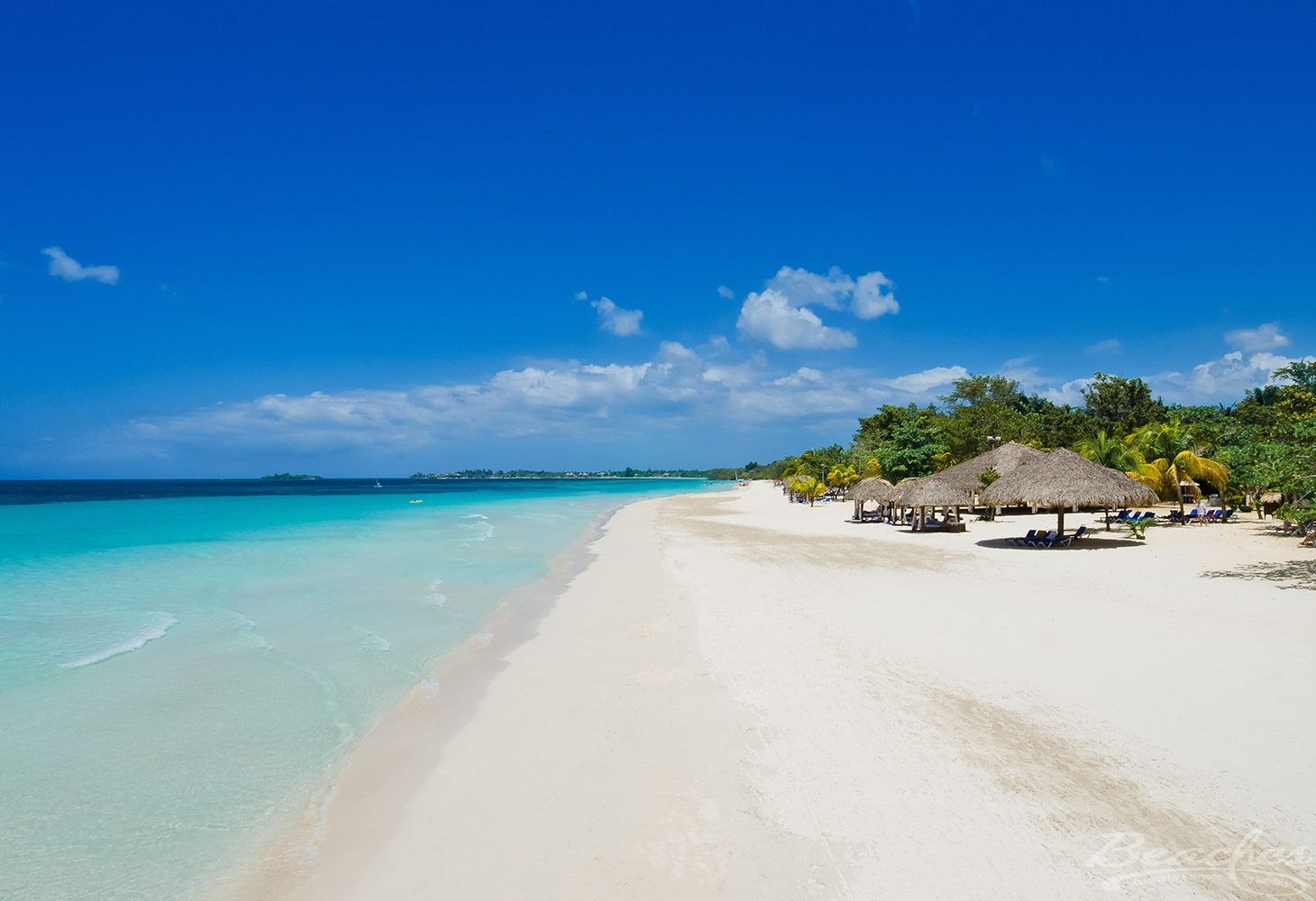 “We wanted to come back,” says Mindy, “to the best time of our lives.”

“Over the past few months, we’ve been confined to our home near Indianapolis, so we became more determined than ever to keep our vow — to ourselves, to each other, and to our overall well-being,” said Mindy. In order to celebrate safely, Bob, Mindy and their travel pod all agreed in advance to self-quarantine and to observe all health and safety protocols, including and presenting a negative COVID-19 test upon entry into Jamaica.

So after taking all the necessary precautions and following Jamaica’s stringent entry protocols, they got on a plane and returned to the ocean and to the laughter. “Back to Beaches,” says Mindy, “the happiest and safest place we’ve ever known.” 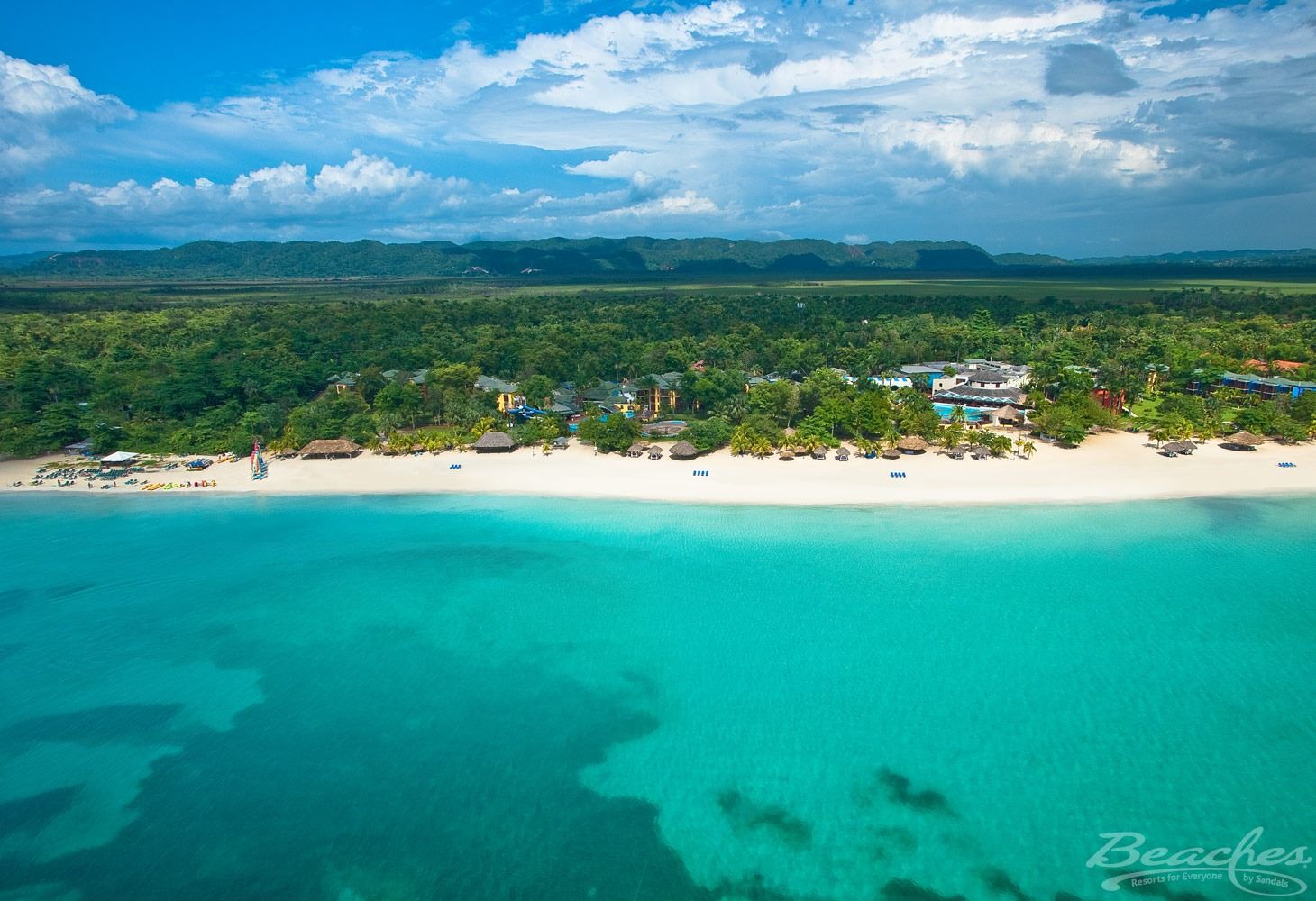 An aerial view of Beaches Negril – the perfect place to take your “pod.”

Why did she choose Beaches? After reviewing the island’s health and safety protocols coupled with the Beaches Platinum Protocols of Cleanliness, a trip to Beaches Resorts seemed like the perfect choice for them, especially since she and Bob were married at Beaches Negril five years ago.

Reflecting back, Mindy said, “Back then, it was more than a destination wedding trip. We found out right away that at Beaches, everyone can let themselves go and act like kids. I mean everyone. You couldn’t tell who was 12-years old and who was 50.” And that’s exactly what they needed right now. They needed a return trip to Beaches Negril – sans kids - to feel a sense of normal again, with their pod of trusted friends who were there to celebrate their marriage five years ago.

Image: The “No Worries Crew” with matching gear, ready to depart to Beaches Negril.

The group of 14 friends escaped the grip of a Midwest winter and gave the 2020 Beaches getaway a name: the “No Worries Reunion.” They wore the slogan on their shirts and masks during the flight and enjoyed the endless cookies and childlike happiness.

“We didn’t have an ounce of anxiety about traveling,” says Bob. “If anything, we felt the opposite. We felt relieved.” With all the precautions the airports, airlines and Beaches Resorts have taken to give guests peace of mind when deciding to travel, Mindy and Bob knew they were in good hands and could escape to paradise safely. 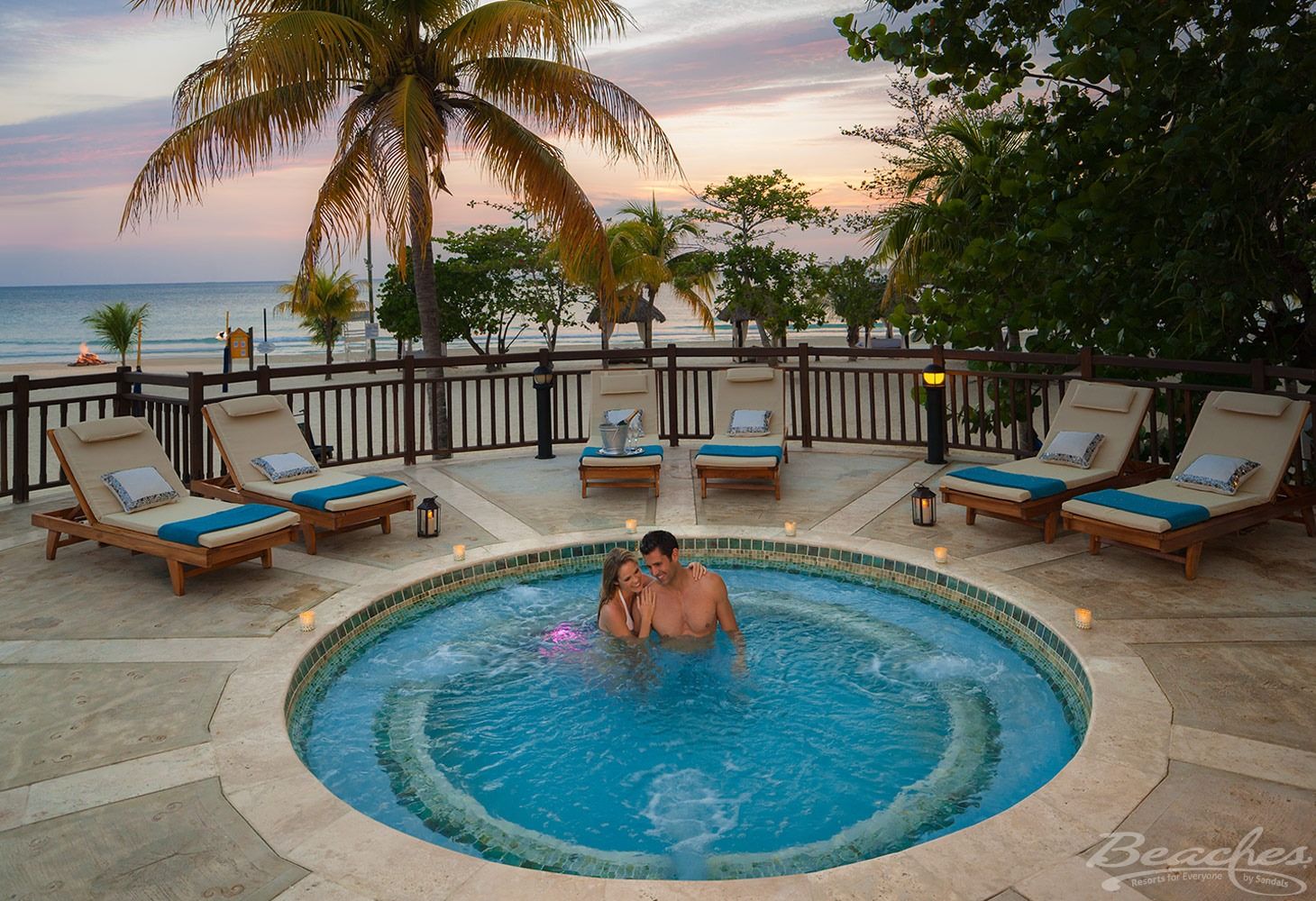 Once they arrived at Beaches Negril, the good vibes immediately kicked in and Mindy and Bob felt like they were home. “It’s hard to describe the thrill of simply being there after not going anywhere in so long,” says Mindy. “The fact we were celebrating our fifth anniversary became part of the total experience. It was personal for Bob and me. We looked around and thought, this is how we remember it. Only this time, it was even better. We were longing for something like this, especially after this year.”

Shortly after arriving, they heard a voice. “Bob and Mindy!” 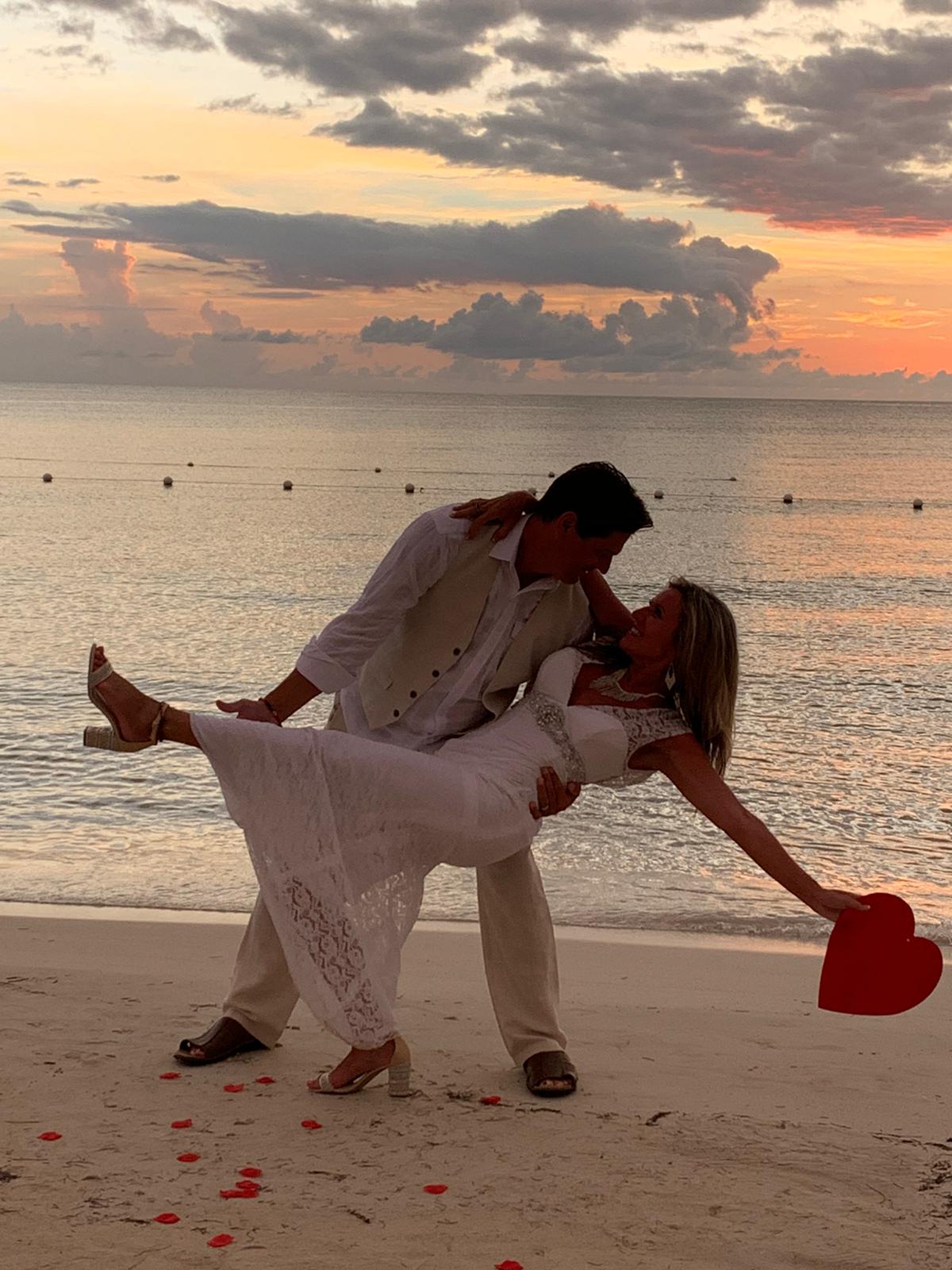 Turns out, Nicolette remembered, too. The photographer who shot their wedding pictures five years earlier decided to make the three-hour commute from her home to see Bob and Mindy again. They excitedly exchanged elbow bumps after not seeing each other for many years – and chatted as if they had just seen each other yesterday.

“That’s what made us want to come back more than anything,” says Mindy. “The staff. They literally treated us like we were part of a family — a really fun family.”

The Beaches crew on the catamaran cruise remembered, too.

“You were here before,” the captain said when he saw Bob and Mindy stepping onboard. “You had that group of people who jumped off the rock at Rick’s Café and laughed all afternoon.” 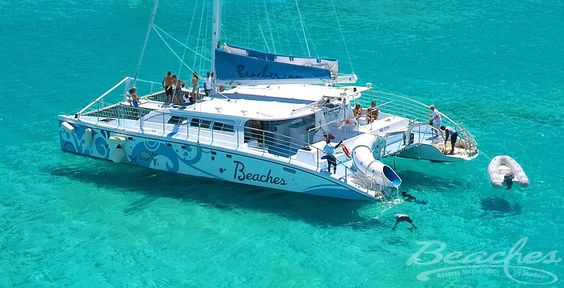 This time they spent three hours at sea with their pod of friends, wearing swimsuits and smiles the size of cantaloupe slices. “We had no kids to entertain, just the kids that lived inside ourselves that needed a safe retreat,” said Mindy.

They could be the kids by just being themselves. Which meant eating pizza fresh out of the brick oven… every… single… day. It meant floating around the lazy river and screaming down the giant pool slide, over and over and over. 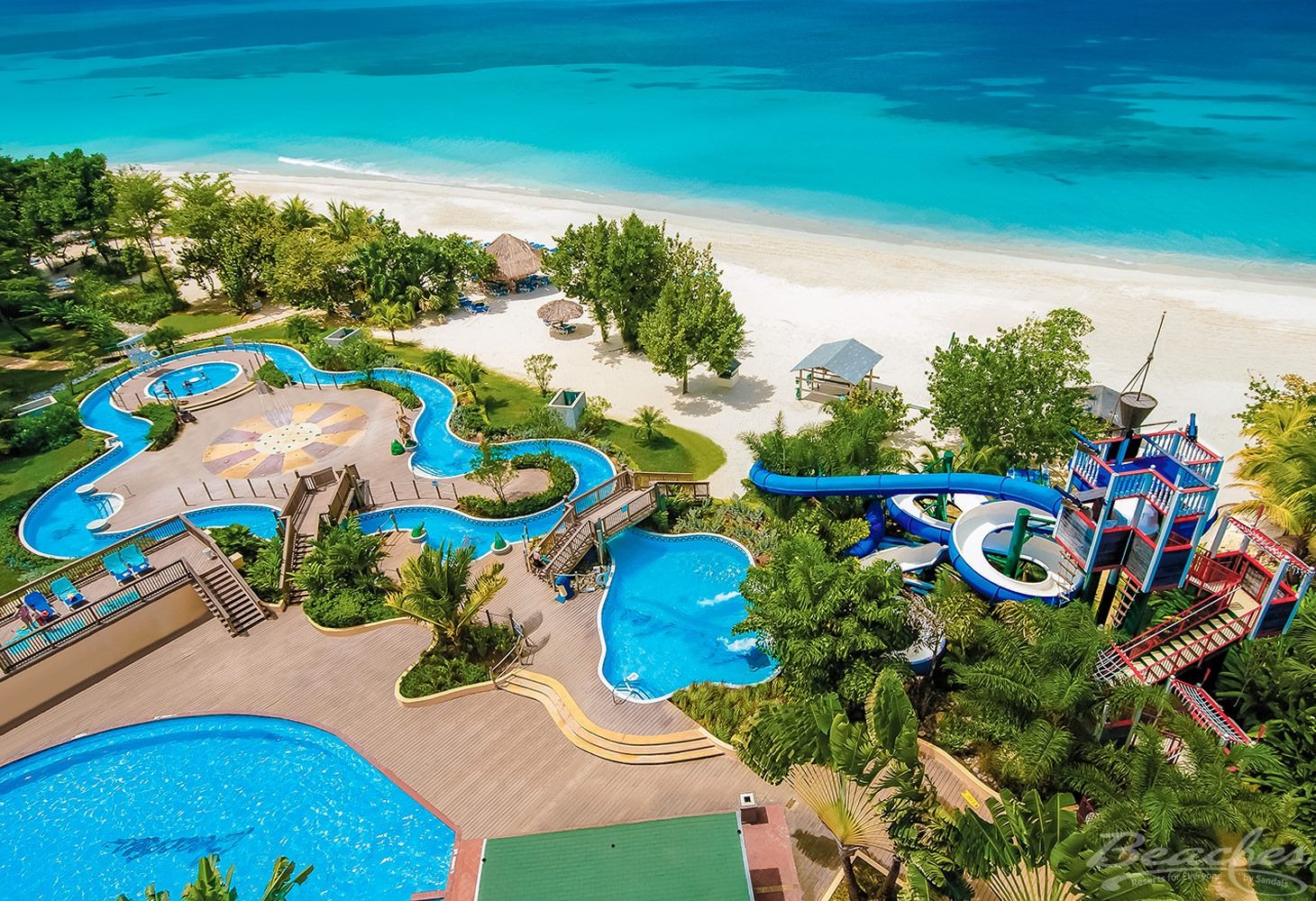 Take your “pod” down the slides at Pirate’s Island Waterpark or float the day away on the lazy river.

They posed with Sesame Street characters and competed in physically distanced games at the pool. Then they played on the beach until they could practically hear mom and dad saying, “It’s time for bed.”

Then they’d wake up to the beautiful ocean view and hit replay.

“The Beaches team spoiled us the way grandmothers spoil you,” says Mindy.

Would you like whipped cream on your pancakes? Absolutely.

Will you be joining us for the dance party on the beach? As if you have to ask.

Why Beaches? “It’s just like we remembered,” says Bob, “but maybe even better.”

“Everything at Beaches is so easy,” says Bob. “We were there with the people we wanted to be there with, in our own little traveling pod.” The pod of 14 ate together at strategically spaced tables, stayed in a cluster of suites, and lived out the slogan on their shirts.

“I’m not just saying this,” says Mindy, “but when you’re having so much fun with your trusted group of friends, there really can be no worries. Our decision to travel was right for us and Beaches Negril made us feel safe and comfortable.” Weeks later, the laughter is still spilling out. The glow of the best time of their lives is still burning. “This gave us the opportunity to truly reconnect with the ones we love in a safe, beautiful environment, and we can’t wait to make more memories in the future” says Mindy.

Before they left Jamaica, Bob and Mindy renewed their personal vow to each other once more: “We’ll be back again.” 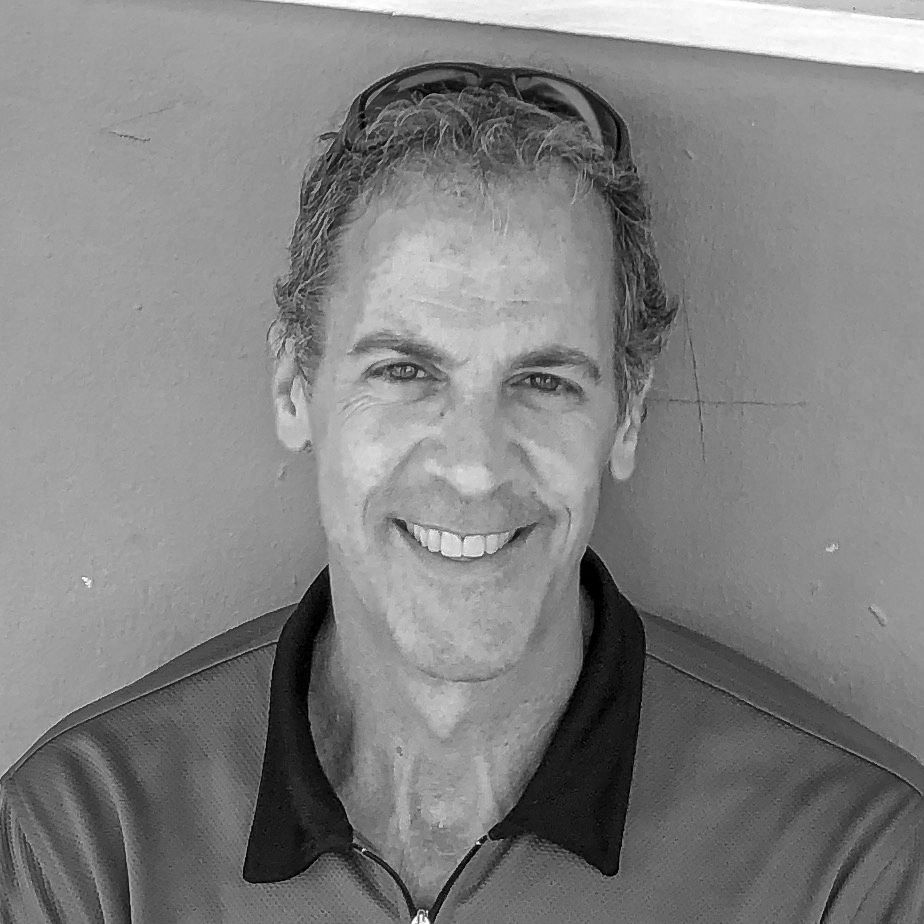